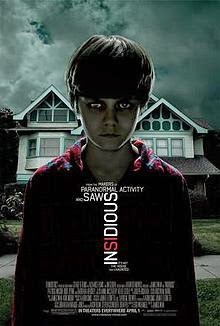 So Insidious, I finally managed to see the whole thing. On the first watch my husband was so jumpy that he couldn't finish it. However, as I discovered he turned off at just the wrong point.

This is a film of two halves.

The first half is really quite spooky and scary. It made me and my husband jump and hide behind cushions and when I watched it a second time with my sister and mother so I could see the end, it did the same to them.

However, I have to say, the second time through the first half was spooky, but not really scary like it was when I didn't know what was coming. It doesn't have lasting scare factor unlike something like Ju-on - The Grudge which gets me every time. I think it's the noises in Ju-on that do it.

So the first half isn't bad and it's worth a watch. The acting is fine, the plot is reasonable and when you don't know what coming it will scare you nicely.

Then we have the second half. It turns out my husband should have kept watching because the second half totally kills any scare in the first half. The main protagonist flips from being the mother to being the father and the explanations come out and it's just, meh. It's over done, it's heavy, it's predictable and it's not frightening at all. I watched my sister go from hiding behind a cushion to wondering when it would end.

There was only one point in the whole second half that made any of us remotely jump.

It needed a twist or a more interesting big bad, but there wasn't anything. The reveal is supposed to be a big shock, but if you didn't see it coming I think you might have been watching a different film. I don't mean the details exactly, but definitely the general gist.

We're supposed to be afraid and we definitely weren't. It went from good old fashioned horror to more of a dark fantasy without the scare factor. I don't think I will be watching it again.

I do have Insidious 2 and I will give it a go, but I'm not holding my breath for a masterpiece.
Posted by Tasha Duncan-Drake at 16:45