In honour of the fact that I have signed up with BooksGoSocial.com to promote The Avebury Legacy, I thought I would introduce you to my main protagonist, Nate (not that he'd get anywhere without Lexie, but she will have her own post). You can read the first page of the book over at BooksGoSocial.com and if you like that you can check out the whole first chapter at The Avebury Legacy's book listing on Wittegen Press, or use the look inside functionality over at Amazon or download the 20% sample at Smashwords. There are also sample options on all sites where the book is listed that offer that service, so you can try before you buy. 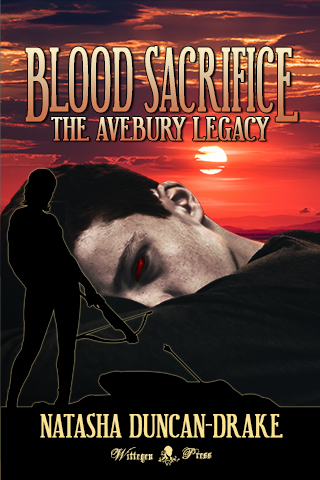 Name: Nate Laven
Age: early twenties
Description: Think surfer dude - blond, classically handsome, tall. He looks like he should be on a beach or in a frat house, not chasing vampires. That's him on the front cover above, but he's a little beaten up and has a small vampire issue going on.

Nate is British born, but his family moved to the USA when he was nine, so he mostly sounds American. He became a hunter when he was seventeen after his best friend was killed by a vampire and he became aware they existed. He was trained by an experienced hunter and started off as part of a group, but went solo after one of his comrades shot him while being careless.

Nate likes to rely on himself and no one else and he trusts only when he has to. Lexie, a white witch and his travelling companion, is the exception, because she saved his life. Nate was infected by vampirism himself when Lexie, already infected, had to use her blood to connect them and save him from a vampire's magic. They are stuck together, because Lexie's magic keeps them partially human and Nate has come to care for her more than he is comfortable with.

He's a good guy, but he definitely has trust issues.

He gets his jobs from a man called Macintyre, who is the main man when it comes to freelance vampire hunting. Macintyre pays well and has a network to rival the combined world churches who are the biggest players on the world stage of vampire hunting. Nate almost trusts Macintyre ... almost. Hunting keeps Nate's bank account healthy and his adrenaline dose high.

His parents think he works as a business consultant which keeps him travelling all over North America.

If you would like to read how Nate became infected with vampirism, then you'll enjoy my novelette, The Beginning (Vampires: The New Age, Prequel #1). The book is usually 99c, but if you have read The Avebury Legacy (Vampires: The New Age #1) and are willing to give it an honest review on one of the major book sites, I'll happily send it to you for free. There is a Google form at The Avebury Legacy's main page with easy fields to fill in to point me at your review and let me know how to contact you to send you the free book.

I've also written a piece of flash fiction for The Avebury Legacy (Vampires: The New Age #1) this week over at the Wittegen Press blog.
Posted by Tasha Duncan-Drake at 12:21