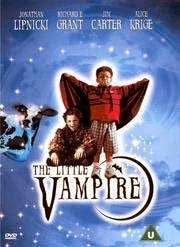 Now this isn't one of my all time favourite vampire movies or anything, but it is one hell of a feel good film. I happened to catch in on TV yesterday and it really is adorable.

You'll recognise Tony (Johnathan Lipnicki) from Stuart Little, which gives you a hint as to the level and tone of this film. It has vampires, but they're kind of cuddly vampires. There are even vampire cows and they are awesome.

This is the kind of movie you curl up with on a Sunday afternoon with cookies and milk and just enjoy.

Alice Krige and Richard E. Grant as vampires are a god send and they are simply wonderful. I love them in most things and this is no exception. They are the perfect choice for slightly creepy, but really, actually good underneath vampire types :).

The child actors in this are also well chosen and talented. I love Rudolph (Rollo Weeks) especially and he has such a completely awesome costume too. If I had been watching this as a child I so would have wanted his outfit - as it is, I want Alive Krige's. ;)

The plot hold together, which is not always a given with children's films; the characters are entertaining and the cast is good. The bad guy is bad, the good guys are good and everything works out in the end. It's difficult to fault the film for what it is.

This is a great vampire film for children and adults who want a heart warming tale with a few fangs thrown in. It's worth it just for the vampire cows, really it is :).
Posted by Tasha Duncan-Drake at 11:41