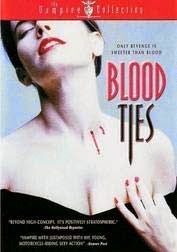 Title: Blood Ties
Rating: 15
Cast:
Patrick Bauchau ... Eli Chelarin
Bo Hopkins ... Chief Hunter
Michelle Johnson ... Celia
Jason London ... Cody Puckett
Harley Venton ... Harry Martin / Harlevon Martinescu
Salvator Xuereb ... Butcherbird "Butch" Vlad
Kim Johnston Ulrich ... Amy Lorne
Summary: After his parents are killed Cody Puckett heads for the big city and Eli Chelarin, who he has been told to find if anything happens. What he doesn't know is that his parents were killed by vampire hunters and he and those he finds in the city are Carpathians. Harry, a reporter and Carpathian who is trying to integrate has to help Cody understand and find those who killed his parents.

This isn't a classic and it isn't utterly amazing, but it is a good early 90s vampire movie. It reminds me a little of Kindred: The Embraced, not least of which because Partick Bauchau is in it, but also because it has vampires hiding in plain sight in a hierarchical, family unit.

It is a classic story of vampires and vampire hunters. The vampires aren't good guys really, except Cody and Harry; they are a little bit grey. They don't kill, but some of them look on humans as sheep to be exploited. The human hunters are definitely the bad guys. They are introduced murdering an innocent couple and then using their son as bait to find more "Carpathian Americans".

The main underlying plot is the ancient conflict, and the character driven parts are about Cody coming to terms with what he is and Harry trying to balance his family commitments and his maybe new girlfriend Amy, who is the DA.

I think I like this movie because of the characters. The normal things I go for in vampire movies aren't there: no glowing eyes; no fangs; no immortality. However, I just really enjoy the characters and the plot. The vampires are stronger and faster than humans, they live slightly longer and they like to bite, but that's about where the vampire stuff ends. I think it was probably budget that caused this since there really are no big special effects. The writing is good, though, and the little bits of vampire lore are interesting and engaging.

My favourite character is Celia. She is a Carpathian and she is the femme fatale, but she isn't helpless. She gets captured, but she doesn't go down without a fight. I love her because she knows what she wants and she goes for it.

This isn't the greatest vampire movie I have ever seen, but I would recommend it for vampire fans if you enjoy the traditional 80s and 90s urban vampire movies.


Master list of Reviews of the Vampire Film I Own
Posted by Tasha Duncan-Drake at 12:52