Review: NTLive Encore - The Curious Incident of the Dog in the Night-time

This is more than a little late, my apologies. I saw this NTLive Encore screening on 22nd May and have been meaning to write a review ever since. 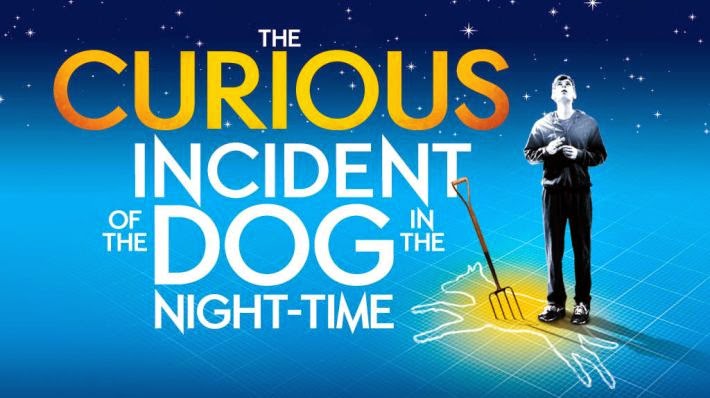 Title: The Curious Incident of the Dog in the Night-Time
Media: NTLive Encore showing
Cast:
Luke Treadaway
Una Stubbs
Niamh Cusack
Nicola Walker
Paul Ritter
Matthew Barker
Howard Ward
Nick Sidi
Rhiannan Harper-Rafferty
Sophie Duval
Director: Marianne Elliott
Summary: Christopher is 15 and described himself as "a mathematician with some behavioural difficulties". His neighbour's dog Wellington is killed in the night with a garden fork and his desire to solve the mystery of who killed Wellington takes him on a journey that will change his life.

The only real way to begin this review is by saying this stage production is utterly amazing. If you have NTLive in a cinema near you and this production ever comes on again, go and see it. You will not regret it.

For those unaware, The Curious Incident of the Dog in the Night-Time is a novel by Mark Haddon which was adapted for stage by Simon Stephens and it is mind blowing.

It is never explicitly stated, but is heavily implied that Christopher is a high-functioning autistic boy who has Asperger syndrome and hence has difficultly relating to the world around him in the same way others do. The play sets out to give us a glimpse of how he perceives the world while solving the mystery of Wellington's death. It does this with the most amazing lighting and computer generated effects and sounds projected onto the stage along with some of the finest acting I have ever seen.

This play is an assault on the senses and on the emotions. I cried a lot and I so wish this was available on DVD so I could cry again and again and again. I also laughed out loud because there were bits that were incredibly funny. I was reminded of the Joss Whedon quote: "Make it dark, make it grim, make it tough, but then, for the love of God, tell a joke." This production is beautifully balanced.

Luke Treadaway deserves so many awards for his performance. There is no doubt I believed I was watching an autistic boy on the stage. His disconnect from the normal world and yet his depth of emotion were utterly captivating. His earnestness, his confusion, his focus, his bravery; it was all there. I could not look away for even a moment.

The rest of the cast are also brilliant. If this was Disney some would be princes, others would be villains and yet, in this, they are real people. No one is perfect, no one is evil, they are simply real. Their pain and heartbreak at certain things is so clear and so is their joy.

The way it is staged is innovative and captivating. There is little scenery and a lot of structure is formed simply by light. When Christopher is on a train it is only some boxes with people sitting on them, but it is still a train. When he is walking through the busy station it is a stage with only a handful of people on it, and yet it becomes a busy station. The skill of the cast and the crew is simply amazing.

This play will tear your heart out and then put it back together for you. It will make you lean forward in your seat to experience everything and shy away when the cacophony is too loud. It will take you from the real world into the mind of "a mathematician with some behavioural difficulties" and bring you back out again, at times with a bang.

I want to see this again so badly.
Posted by Tasha Duncan-Drake at 10:31