Our kitties have not been getting on for the last few weeks and we've tried everything we can think of so we've had to go with drastic measures.

Now our house has a new half and an old half. Basically we extended on the side for almost the same size as we already had a few years back and gave ourselves a ginourmous kitchen and open plan dining room, a new spare room and a new bathroom. The two halves of the house are joined by an archway and usually we just have a curtain across it in the winter and nothing else.

However, now we need to separate the two kitties. According to the internet if two cats are fighting then it is best to separate them completely until they have calmed down and allow them to hear and smell each other, but not see, and then carefully reintroduce them to each other when all is well with the world again. Hence

And yes I believe it deserves the capital letters because it's been so stressful trying to keep the kitties apart and stop one chasing the other that we installed the solution at midnight last night after Rob got back from Germany (we didn't get to bed until 1am).
So this is actually two child gates stacked on top of each other. The bottom one is blocked off with card from the box it came in so the kitties can't just hiss and growl at each other.

It means I have to leave the back door open for Afia to go in and out some of the time and the catflap for Amber the other half, but I can deal with that. Afia has the new half of the house and Amber has the old for now.

Amber seems more relaxed already without having had to deal with Afia all night. She had taken to hiding under the sofa or under the throw on the big sofa when she slept. Yesterday I had to go find her to give her her morning treat and this morning she greeted me at the top of the stairs, meowing loudly :).

Afia is not happy she can't just roam the whole house, but even she seems more relaxed this morning and she has two cat trees and a myriad of toys to keep her happy. She's also going to be really pleased when I head back in there to finish cleaning because then she'll have mummy for a few hours :).

It's going to be a pain for a while, but I want my kitties to be happy and relaxed and neither of them have been for several weeks. We've no idea what happened, one day they were sniffing each other and playing together and almost friends and then suddenly they seemed to hate each other, or rather Amber seemed afraid of Afia and Afia decided to use this to take over the whole house. There was lots of growling and hiding under the sofa on Amber's part and chasing and not much else on Afia's.

Amber hasn't been downstairs for more than a minute or so for over a week now. Hopefully she'll start coming down again now.

There is no getting away from the fact that Amber is a little highly strung and she takes ages to adjust to anything new. Clearly something happened between them and she has not adjusted, so hopefully this way will give them more time. I'm going to start moving both their food bowls towards the gate over the next few days so they will end up eating in proximity to each other and get used to non-hostile relations.

So far Afia has not tried to fly so we haven't had to block up the top of the arch, but I'm not discounting the possibility of the great escape at some point. We have a plan if that happens!

Both of their previous mums are visiting today, so hopefully they will find much more happy, relaxed cats when they arrive. Let's hope we get back to more of this 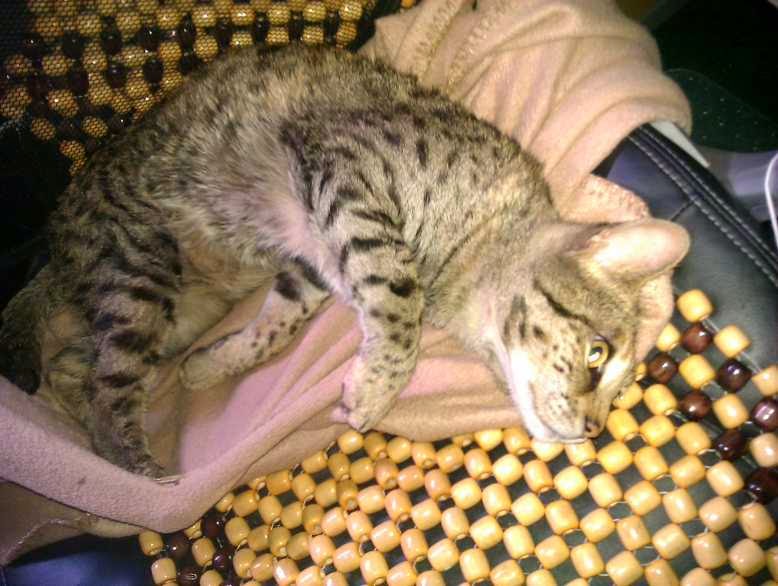 and less stress. I have been at my wits end for days, so I am looking forward to some peace too :).

Right, now back to cleaning.

Have any of you had trouble with pets?
Posted by Tasha Duncan-Drake at 08:40