Some vampires have beautifully manicured nails like the traditional evening dressed Dracula, others end up with inch long talons such as Nosferatu, it depends on your legend/fiction of choice.

In reality, after death skin retracts, hence it looks as if hair and nails continue to grow. This lead to the belief that some vampires have talons. There is also the horrible truth than in times past some people were accidentally buried alive. The poor unfortunates would then scratch at the lids of their coffins with the only thing they had, their finger nails and it is amazing what damage can be done when someone is desperate.

The iron kind of nails also have a place in vampire lore. Sometimes suspected vampires were nailed to the base of their coffin to prevent them rising from the grave. One such example is The Vampire of Lesbos, nailed to his coffin with eight inch iron spikes. The stake through the chest was a similar idea in some cases to pin the vampire down rather than simply destroy the heart.

It seems rather barbaric to nail the creature down, trapping, but not necessarily killing it, what do you think?

Today's undead is from Irish folklore.According to Enchanted Doorway this is just the name for the undead, but Mari Wells this is a vampire created by magic.

There is a famous Irish chieftain called Abhartach who came back as a neamh-mhairbh. He was an evil wizard and the day after he was dispatched by another chieftain, Cathan he came back and demanded the blood of his people to sustain him. If you would like to read the whole tale it is listed here at Ocathain.com. 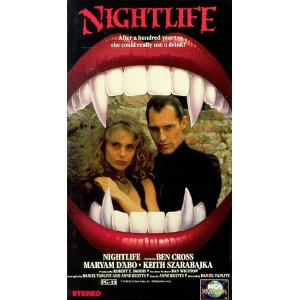 Title: Nightlife (1989)
Rating: 15
Summary: Angelique buried herself one hundred years ago to escape her controlling vampire boyfriend, Vlad. When she wakes she finds a new century and Dr David Zuckerman, a blood specialist who may be able to treat her disease. Unfortunately for them both, Vlad is not gone.
Why you should watch this: It's really funny. It's corny and Vlad is OTT, but it's entirely deliberate. I love this film because it makes no excuses. It's not deep, it's not moody, it's just honest fun with fangs.

A Little Persuasion
(#14 in The Diverse Life of Ianthe Jawara, Vampire)
by Natasha Duncan-Drake

She had not wanted DC Phelps to see where she lived, so she had asked him to drop her at a friend's place. That friend was non-existent, but the address was just round the corner from Cal's.

"I got shot," she replied and promptly dug her fingers into her shoulder and pulled out the remnants of the bolt.

"I'll get the backup blood," Cal said in a very calm and sensible manner.

It was best not to upset a vampire when they had been hurt. Ianthe was quite proud of her self-control so far.

A bag of blood later and she was feeling much better.

"Do you know who it was?" Cal asked once she had fed.

"No," she admitted, "but he was human and he knew what he was doing."

"He was also a sandwich short of a picnic," she revealed.

Insane hunters were never a good thing even if they weren't after your particular sort of supernatural creature.

"You have to tell Alex," Cal said firmly.

Ianthe didn't like that, but she knew it was true.

"I know," she admitted, "but I want more information first. Look at that," she added, pointing at the bloody cross bow bolt; "they have to be Ren's work."

The head on the bolt was no ordinary tip; it was shaped and had been designed to do damage.

"Are you sure?" she replied.

Ren lived in the cellar of an old pub, long since closed. There was a security system on the door.

"Who is it?" a crackly voice asked after Ianthe pressed the button.

"Just open the door if you want it to stay a door," she replied; she was not in the mood for games.

Her shoulder had healed, but it still ached. She suspected the tip of the bolt had been coated in something that was reminding her of the wound. Luckily for the door Ren seemed to realise he had no options and there was a buzz and a click.

Ianthe pushed into the dark interior with Cal close behind and walked across the room and behind the bar. The trap door was already open; a very neat use of modern technology, very well hidden.

"My dear, Ianthe," Ren greeted as soon as she climbed down the stairs.

He was a small, rather unpleasant looking man with round glasses and a weasly face. In fact he was a walking cliché, but Ianthe really didn't care.

"This yours?" she asked and threw the crossbow bolt onto the table.

She saw recognition in Ren's features almost immediately, but the man made a show of picking the bolt up and examining it. As far as she knew Ren was over two hundred years old and his speciality was weapons. He could make anything anyone wanted and sometimes the supernatural community needed to hunt down their own rogues. She didn't know what exactly Ren was, but he was about as close to human as a supernatural creature could come without actually being one.

Ren was stalling, so she reached out towards a sheet of metal leaning against the wall. Very deliberately she let her manicured nails turn into talons and ran them, screeching, down the metal.

"Why did you sell it to a human hunter?" Cal demanded.

"I take it there is trouble?" Ren asked.

"I was shot by that tonight," she replied.

"My sincere apologies," Ren said and Ianthe didn't believe it for a moment.

"How many?" she demanded.

"Twelve," was the response and at least that was honest.

Ianthe had no time for small talk and she grabbed the bolt parts and turned on her heel. She had to speak to Alex and then she needed to get laid, badly.

A few of us discovered that we all had supernatural themes for the AtoZ so we got together and did a mini list. If you also have a supernatural theme (ghosts, monsters, witches, spells etc), please feel free to add yourself to the list.

get the InLinkz code to add to your blog
Posted by Tasha Duncan-Drake at 00:00