I is for Imagination - Blogging from A to Z April Challenge

I is for one thing a writer cannot live without: Imagination.

Where would we be without the ability to imagine things beyond our reality? I'm not just talking about the supernatural, but about people out of our scope of knowledge and places we may never have visited.

Some of these things can be overcome with research, but research can't tell you what it feels like to sit on the roof of a New York skyscraper. The only way to put that on paper is to research the building and the area and then bring in something of your own experience with being out doors up high and imagine the result.

My imagination is a weird and wonderful place. Sometimes it becomes fixated on one tiny point and will not let go and at others it moves so fast from one idea to the next that I can't keep up. This can make for very odd moments at times :).

Come on writers, own up, who of you has been walking down the street and suddenly dialog from one of your characters has popped out of your mouth? I know I have. This usually happens when for some reason my brain becomes fixated on a certain phrase. It can be a specific character saying it in my head or it can be a generic phrase where I have no idea who is going to eventually say it. Only when I've managed to slip it into a story does it go away.

The most memorable time was when the phrase that was stuck in my head was - "I'm going to kill you." As you can imagine that was a problematic one. Sometimes I think it might help if writers could carry signs that said 'Just a writer trying out dialog, please ignore me'. It would save on misunderstandings :). 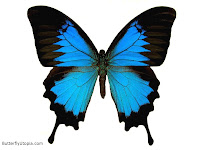 When I write I don't write in a straight line; my mind does not work in a linear fashion. At times a story idea can start from a single image in my head, at others a vague plot comes to me, but I rarely start at the beginning to write it.

I have a butterfly mind :).

I write what interests me at the time and then go back later to fill in the parts I wasn't sure about. I'm surprised I don't have to do more rewrites, but the one good thing about my brain is it does tend to come up with coherent plots even though it's bouncing from one point to the next in a random order.

I think imagination is one of the great gifts we all share. You can see it in small children at play as they take a cardboard box and it becomes a car or a castle and you can see it in adults as their minds wander during boring meetings or as they create sophisticated stories on paper and online. It is a trait that should be encouraged for all the joy and wonder if can bring.

Imagination can be a hard taskmaster, demanding attention at all the wrong times, and yet it can also be the most amazing thing as it drags me from one idea to the next. Imagination is a wonder.