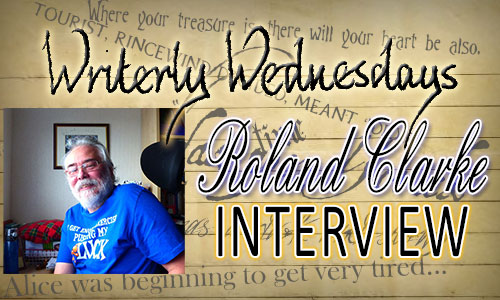 Please join me today in welcoming the lovely Roland Clarke to my blog. He has been kind enough to give me an interview.


Can you tell us a little about yourself?

As a kid, I wanted to be a farmer so writing was a side road that came along – once I started scribbling fantasy and SF shorts in my teens. Well, there was an essay competition that I won when I was younger, but that wasn’t career moulding. Anyway, one failed sci-fi fanzine later I became a journalist, and then a photographer. But I got distracted and for some years sold organic fruit and vegetables. Eventually, I returned to journalism, until I retired in 2005 due to ill-health – multiple sclerosis.

Tell us about your book(s).

To date, I have had one novel published – “Spiral of Hooves” – a murder mystery set against the equestrian world that I covered as a journalist. Although I wrote a sequel, the novel wasn’t promoted very well and is out of print – for now. I’m unsure whether to self-publish or search for a new publisher, as I’ve left the original one.

Since then, I have written a post-apocalyptic saga set after a mega-solar storm. “Storms Compass” is, I hope, in the final stages of polishing, but will need a publisher – unless I find the resources to self-publish.

There are other draft novels in the pipeline, both mysteries and speculative. But the pipeline has many sink-holes and dead-ends.

What started you writing?

As a teenager, reading great SF and fantasy. In later life, having experiences and ideas that seemed to be the basis for novels. Dreams also play a part, as some of my best/craziest ideas come at night. (I’m not referring to the journalism as that was a different motivation.)

Is there any genre you won't write and why?

Writing speculative fiction and mysteries, and having tried my hand at writing children’s stories – with mixed results – I feel that the two areas where I would struggle are erotica and humour. I don’t have the knack. But I hope that there are some humorous snippets in my writing, and I don’t avoid writing naked and intimate scenes. However, I prefer ‘devious’ and ‘mysterious’ so lean towards that.

What is your favourite genre to read and why?

I’m a bit of a magpie with my reading, choosing books by their blurb rather than by genre. However, I tend to read more speculative and mystery, with the latter edging ahead on my ‘Goodreads counter’. That’s probably because I get swept along by clever plot devices and twists, and good characters. But change the setting to steampunk with a mystery, or a historical crime and you’ve got me hooked.

What new projects do you have in the pipeline?

Beyond “Storms Compass”, there is my NaNoWriMo 2015 novel, “Fates Maelstrom”. It’s the first part of a detective mystery series set where I live in Wales, and features a female Goth detective. However, I also have the first draft of the “Spiral of Hooves” sequel, stories in various stages that develop the “Storms Compass” world, a half-written draft sequel featuring my Goth detective, as well as an idea for an alternative history set in a 21st century Viking World.

I just have to learn to focus on one project at a time, although that depends on what gets the kind of reception from beta readers that inspires me to continue.

If you could invite one character from your books to dinner, who would it be?

Possibly Jarilo, the shaman protagonist from “Storms Compass” as he has a different perspective on life from most of the others. Strangely, I have two writer friends that are practising shaman, but as yet neither have come to dinner. And I have an affinity with pagan religions and practises.

If you could invite one character from someone else's books to dinner, who would it be?

Has to be Gandalf from my favourite book, “Lord of the Rings”. He has seen so much and is content to mix with all kinds of people from hobbits to kings. Plus, he’d get on with Jarilo, if I ensured it was the same dinner party. Between them they might save my writing career.

Do you ever cast your characters with actors in your head?

Most of my characters get cast with an actor, but only those get interviews and detailed profiles. I find it helps with the visualisation, even when I re-cast a role. For instance, the NCIS character Abby (Pauley Perrette) was my original Goth detective – until I saw a picture of Noomi Rapace, although not in “Girl with the Dragon Tattoo”.

Do your characters every run away with the plot when you're not looking?

When I get bogged down, or hit a road block, they can take over – even help. During NaNoWriMo, my characters wanted another murder to take the plot in new directions. Or was that me thinking about my readers?

I grew up with the original Star Trek – and with Doctor Who – so they were central to my growing passion for science fiction. I’ve followed them both through their various incarnations, but… well, Stars Wars hooked me when it came out and then with the sequels. I even survived the prequels – by accepting that they were backstory, of a sort. I have yet to see the new film, but only because wheelchairs and cinemas don’t mix. But the Blu-ray will be a must.

Currently, I’m obsessed with Star Wars… so I’ll choose that for now. Anyway, I’m off to play the MMORPG “Star Wars: The Old Republic” set 4,000 years before the movies, but still involving the struggle between light/Jedi/Republic and dark/Empire/Sith. 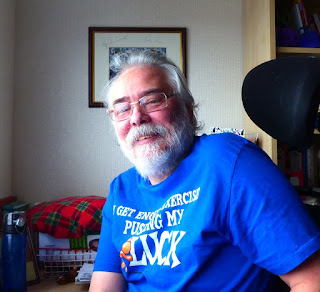 I am a retired equestrian journalist and photographer, who used to be a regular contributor of articles and photos to Eventing Magazine and other equestrian media. Sadly, Multiple Sclerosis clipped my wings and I was unable to meet deadlines so easily and found it increasingly hard to get to equestrian events.

Once retired I was unable to abandon the scribbling and so I found time to complete my first novel, “Spiral of Hooves”, which was of course set against the world of eventing.  Published on December 9th 2013, the novel is currently out of print.

My current Work In Progress is Book 1 of my post-apocalyptic Gossamer Flames saga - Storms Compass. I am also writing “Fates Maelstrom”, a psychological mystery set in Snowdonia, which is the first of another series.

My wife Juanita and I live in Harlech, Wales with our two cats Willow & Kefira, plus two dogs, Quetzal & Treeky. Our beloved cat Whisper’s ashes are on the mantle alongside Juanita’s daughter Carrie’s ashes and those of my old cat Oliver.  Our office has an inspiring view of Snowdon and the surrounding mountains, and across the estuary between Harlech and Porthmadog.


And I usually call myself The Silver Scribbler….